HomeCourage Sports That feeling in the pit of your stomach saying you can’t do it…It’s a fucking lie!

That feeling in the pit of your stomach saying you can’t do it…It’s a fucking lie! 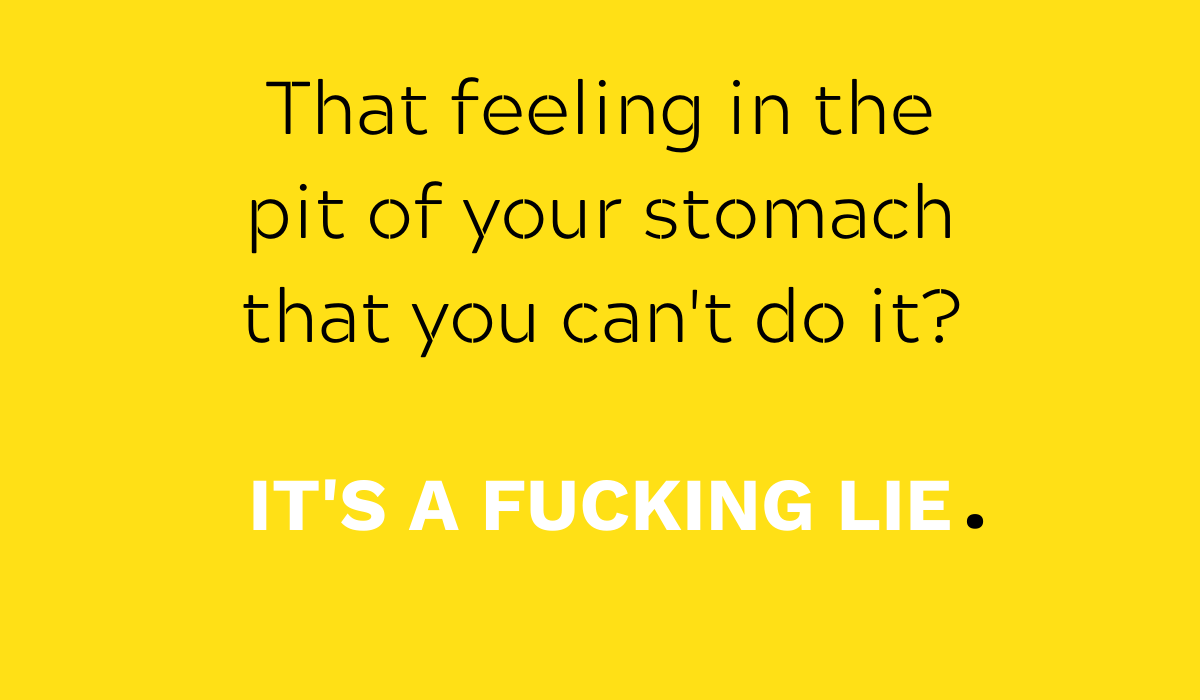 How many things have you not done today, yesterday, last week, last year, because of fear of failure, what people think, or breaking something that’s not already broken?

How many more things are you prepared not to do tomorrow, and likely for the weeks and years to come because of the fear you’re holding for these things?

Fear is the only emotion that is shit scared of itself! I’m serious, think about it… when you’re feeling excited, pumped up, adrenaline running through your veins, it feels awesome, euphoric even.  You want to hold on to that emotion as long as possible, embrace it, squeezing every last drop. However, no matter how hard you try the feeling washes through you and slides away, for a while anyway. The chase is now on for another shot at getting that feeling again… you adrenaline junkies know exactly what I’m talking about!

Not fear though, as soon as that bad boy starts to approach, we turn on our heel and run for the hills, finding a dark place to hide, until it finds another victim to inject with its venom.

In truth, just like all the enjoyable emotions we’d like to keep hold of, the feeling of fear will pass through and slide away just as they do. I wonder what it would be like if you could just sit with it, and allow yourself to feel the feeling of fear as it passes through …

Twelve weeks ago, whilst winter training in Spain, Cameron had an accident on his Motocross Bike, landed in an awkward position and as a result broke his upper arm (humerus). In a spilt second his much-anticipated trip to Valencia came to a grinding halt. Once the doctors had fixed him up the reality that he would not be able to ride his pride and joy for the next 12 weeks started to set in.

Flashing before his eyes was a big red STOP! Light. He had that feeling in the pit of his stomach that he couldn’t do anything about this situation, leaving him to feel completely helpless. Cameron is one of the most determined, gritty and competitive people I know, yet the perceived enormity of what this STOP! sign meant took some time to get his head around.

He needed some ‘Hippo Time’. Hippo Time is time to complain, moan and be frustrated, it’s an important part of facing into your fears, but is even more important to put a timescale on Hippo Time, If we don’t it becomes all-consuming and you’ll soon be on a downward spiral to negative thinking.

So, we took a few days out to have some Hippo Time, reflect and reset the plan.

In these moments it’s important that you understand you have the choice to respond in different ways. Cameron chose to spin the STOP sign around to reveal the words on the other side, ADJUST….So, what’s this got to do with fear?

There are 3 levels of fear:

Level 1 Fear – The fear of things that just happen, like having an accident, failing or being rejected.

Beneath both of these types of fear is

Turning can’t into can is not as simple as reading a quote on Facebook or a meme on Instagram, it requires strength of mind, and above all belief that we can always find another way!

Whilst fear is chasing, we are so exhausted from the running away, our ability to make good choices diminishes.

Cameron experienced Fear 1 (an accident) it just happened, but what he did next required action Fear 2, to make the choice to stay strong both physically and mentally, adjust his training plan, adjust his eating plans, and ultimately find new ways to perform at his best.

I can’t run …I can walk really fast with a weighted vest.

I can’t ride my MX bike…I can static cycle.

I can’t train my left arm … I can train my right arm.

I can’t play football with my friends … I can connect with them through online football.

So, here’s the thing, the word can’t, and the word can are the difference between letting fear control you, and you controlling it. Pushing through fear is less frightening than living with the constant fear that comes from the feeling of helplessness.  By simply changing your language from can’t to can you open up a new world of learning and possibilities that didn’t exist for you before.

He can achieve his goals even with a broken arm, (even ran his first ever 10k only two days after being taken out of cast!)

He can stay focused over long periods of time (Endurance)

He can adjust in changing circumstances (Agility)

He can handle it!

The result – The most mentally and physically strong he has ever been – READY TO RACE!

So, like I said, that feeling at the pit of your stomach saying you can’t do it?